Not much can be done once a child or adult comes down with chickenpox, mumps, or measles.  Vaccination is the best remedy to prevent these contagious diseases in the first place.  However, in treating chickenpox, mumps, and measles, the best treatment is to let them run their course.  In most cases, serious complications usually don’t occur.  However, there are always exceptions, so it is best to keep the family doctor informed of the patient’s progress.

Chickenpox is an infection caused by the varicella-zoster virus. It causes an itchy rash with small, fluid-filled blisters.  Furthermore, the virus is highly contagious to people who haven’t had the disease or been vaccinated against it.  Today, a vaccine is available that protects children against chickenpox.  Also, routine vaccination is recommended by the Centers for Disease Control and Prevention (CDC). The chickenpox vaccine is a safe, effective way to prevent chickenpox and its possible complications.

The itchy blister rash caused by chickenpox infection appears 10 to 21 days after exposure to the virus and usually lasts about five to 10 days. Other signs and symptoms, which may appear one to two days before the rash, include:

In addition, once the chickenpox rash appears, it goes through three phases:

New bumps continue to appear for several days, so you may have all three stages of the rash — bumps, blisters, and scabbed lesions — at the same time.  Also, you can spread the virus to other people for up to 48 hours before the rash appears.  The virus remains contagious until all broken blisters have crusted over. 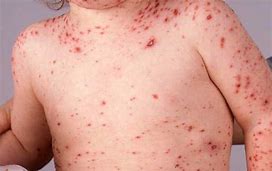 Also, the disease is generally mild in healthy children.  Furthermore, in severe cases, the rash can cover the entire body, and lesions may form in the throat, eyes, and mucous membranes of the urethra, anus, and vagina.

When to see a doctor

Doctors generally diagnose chickenpox based on the rash.

However, if there’s any doubt about the diagnosis, chickenpox can be confirmed with laboratory tests, including blood tests or culture of lesion samples.

In otherwise healthy children, chickenpox typically needs no medical treatment. Your doctor may prescribe an antihistamine to relieve itching. But for the most part, the disease is allowed to run its course.

If you’re at high risk of complications

Mumps is a contagious viral infection of the parotid gland, which spreads easily via saliva. Swelling of one or both parotid glands, which presents as puffed out cheeks, is the primary symptom of mumps.  Also, treatment for mumps involves lifestyle changes as it resolves on its own in a few weeks.  No medications are generally prescribed for treatment.

The Virus Spreads By Person- to- Person Contact Through:

Infection by the mumps virus may not result in symptoms or can lead to mild symptoms in some cases.
Notable symptoms include: 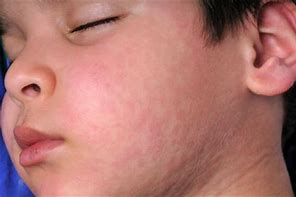 No medications or therapies are used to treat mumps as it usually resolves on its own in a few weeks.

Measles is a childhood infection caused by a virus. Once quite common, measles can now almost always be prevented with a vaccine.

Also called rubeola, measles can be serious and even fatal for small children.  While death rates have been falling worldwide as more children receive the measles vaccine, the disease still kills more than 100,000 people a year, most under the age of 5.

Furthermore, as a result of high vaccination rates in general, measles hasn’t been widespread in the United States for more than a decade. The United States averaged about 60 cases of measles a year from 2000 to 2010, but the average number of cases jumped to 205 a year in recent years.  However, most of these cases originate outside the country and occur in people who were unvaccinated because they were unaware of an earlier vaccination against the disease. 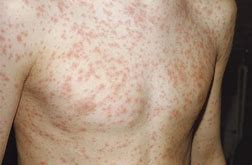 Also, the infection occurs in sequential stages over a period of two to three weeks.

Over the next few days, the rash spreads down the arms and trunk, then over the thighs, lower legs, and feet. At the same time, the fever rises sharply, often as high as 104 to 105.8 F (40 to 41 C).  The measles rash gradually recedes, fading first from the face and last from the thighs and feet.

When to see a doctor

Measles is a highly contagious illness.   The measles moribillis virus causes this disease to replicate in the nose and throat of an infected child or adult.  Consequently, when someone with measles coughs, sneezes or talks, infected droplets spray into the air, where other people can inhale them.

The infected droplets may also land on a surface, where they remain active and contagious for several hours.  Also, you can contract the virus by putting your fingers in your mouth or nose or rubbing your eyes after touching the infected surface.

In addition, the infection rate is about 90 percent for people who have come into contact with someone with the virus.

Risk factors for measles include:

Complications of measles may include:

If you do get the measles virus, medicine won’t cure it (drugs don’t kill viruses).  However, the best way to speed up the recovery process and prevent complications is to drink plenty of fluids and get lots of rest.

In the U.S., about 1 in 4 people who get measles end up in the hospital. Children under age 5 and adults over age 20 tend to have the worst problems.  These may include: In an effort to be completely transparent, I want to let you know that I have an affiliate relationship with some of the companies whose products or services I recommend. This means that, at no additional cost to you, I will earn a commission or credit if you decide to buy any of their products or services. This is one of the ways I pay for maintaining this site. Just to be safe, you can assume that any link that you click while on my site or using any of the products is an affiliate link and I will earn compensation as a result. Remember spend your money wisely! Only deal with merchants that have a good and solid reputation. James M. Krug